Hello! How can we help? The field has validation to only accept numbers as digits (e.g. 3), with respondents seeing an error message if they try to enter a non-numerical answer (e.g. three). On most modern mobile browsers, it will bring up a number keyboard for respondents to input their answer. 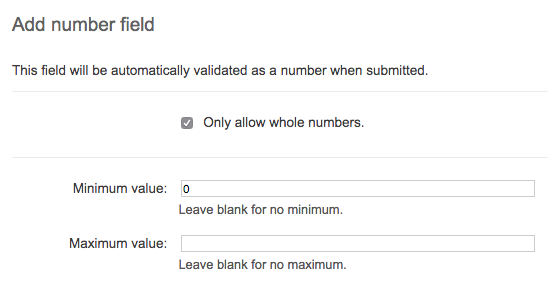 Settings can also be customised to include minimum and/or maximum values that will be accepted, such as to restrict respondents to numbers that lie within a set range.

One important thing to note: the number answer component should only be used when asking for data that has a numeric value, for example when asking about quantities of people or things, such as "how many employees do you have?".

To collect numbers that are used for identification, e.g. ID numbers or telephone numbers, you should still use the single line text component. This is because the .xlsx export will treat data collected by the number component as a number which could lead to issues, such as it removing the starting 0 or + from telephone numbers, for example.